The OFFICIAL Site For L.C. Greenwood 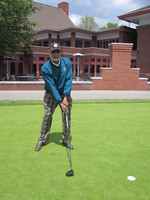 A PRO AT BLOCKING ARTHRITIS - BY GEN LUCIDI PAYNE

“Give up golf because of arthritis—never happen,” says L.C. Greenwood, best known as one-fourth of Steel Curtain during the Steelers’ 1970s dynasty years. For 13 years, the aggressive defensive end weathered lots of bumps and bruises, which often damaged his ligaments and sup-porting structures. Eventually, those sports injuries resulted in Green-wood developing osteoarthritis, causing painful, swollen, stiff and sometimes enlarged or deformed joints. Today, asking the six-time Pro-Bowler where it hurts generates a laugh and quick response. “Where doesn’t the arthritis hurt, it’s everywhere.” He adds that athletes’ injuries progressing to arthritis isn’t unusual. “I love golf. I’m out in the fresh air with people I want to be around. I’m still competitive, except now it’s more that I’m competing with myself to get the ball in the hole. When I walk off the course, and even hours later, I feel great.” The lure of golfing is among the motivations that convinced Green-wood to shake off his arthritic aches and pains and focus on techniques that make him feel better. While explaining that he understands why many people with arthritis need medications, Green-wood says he tries to avoid them. Instead, he stresses daily exercise routines that include stretching, walking, running, plus working out at home and at the gym. Exercising is just one of the activities that keep the 66-year-old on the move. A successful entrepreneur, Greenwood concentrates much of his energies on his three businesses—Greenwood Manufacturing, a fulfillment and corrugated packaging company: Greenwood McDonald Supply, an electrical supply company: and Greenwood Enterprises, a coal and natural gas, and electricity marketing company. He’s also on board of numerous charitable organizations. Naturally, with his sports and business backgrounds, Greenwood is in demand as a keynote speaker addressing organizations on such topics as ways leaders can grow and sustain minority-owned companies. A Pittsburgh resident for decades, Greenwood is a popular celebrity invited to golf tournaments throughout the country. At those tournaments, spectators just might see the imposing 6’6” Greenwood in his signature gold shoes. When Greenwood severely injured his ankle playing for the Steelers, his doctor recommended that he wear high top shoes. Always a snappy dresser, Greenwood nixed the black shoes as “ugly.” Instead, with the help of a dedicated equipment manager, he came up with a pair of gold-colored shoes. “They still were my good luck charm then—and they still are.” And he’s also made time to be an arthritis advocate. LC’s testimony on Capitol Hill described his experiences with arthritis and the surgeries the disease has caused him to endure. He urged Congress to support research that would help younger athletes at risk for developing arthritis. That advocacy was recognized by the Arthritis Foundation who honored him last year at its annual Pittsburgh area fundraiser, the Bone Bash. The always upbeat Greenwood, who played in four Super Bowls, has a pep talk for others with arthritis. “Find a form of exercise you like and can do. It will help you feel better. For me, golf does the trick, but there is an activity out there for every person. Just move. Find what makes you move and you will feel better.” For information about L.C. Greenwood or his speaking engagements, go to www.LCGreenwood68.com or call 412-680-3222.